6 Creative Ways To Improve Hand Hygiene Compliance at Your Hospital

How to Increase Linen Awareness with Clinical Staff

Improper and inefficient use of linen can be a costly expenditure for healthcare facilities, resulting in thousands of unbudgeted dollars going toward unnecessary linen expenses annually. Ultimately, misuse of linen affects the bottom line. We spoke with April Santa Ana, HHS Linen Utilization Manager, who oversees the linen process at multiple hospitals throughout the greater San Antonio, Texas area. April’s best practices, including education and awareness campaigns, have brought significant change to how linen is managed across the clinical teams, resulting in dramatically reduced linen costs.

“Linen is an important commodity, and hospitals can ill-afford to waste resources,” shares April. “The way linen is managed can greatly impact linen costs as well as the patient experience. If the team isn’t properly educated on the different types of linen or correct usage, there may be negative effects.” 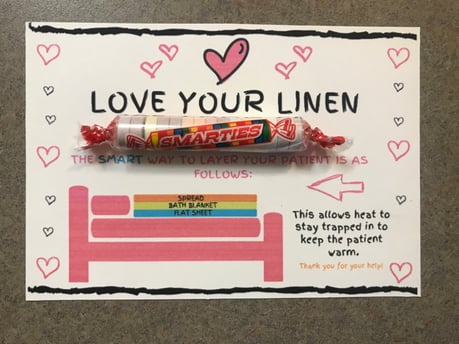 Imagine you are rounding on a patient who has requested extra blankets only to discover that their bed has been made with two spreads and a flat sheet. This layering technique is the least effective option for retaining warmth, as spreads are made with a loose weave, which weighs more than a blanket and is less effective at trapping body heat. This example would serve as an ideal training opportunity for clinical staff on the difference between types of blankets and weaves. To ensure patients remain warm during their stay, the most efficient layering technique is to start with a flat sheet layered with a bath blanket and topped with a spread. Both flat sheets and bath blankets have a tighter weave than a spread, resulting in a better insulator of heat. Additionally, these linens weigh almost three to five pounds less than spreads, helping to reduce pounds and save on costs.

Pinpointing areas of opportunity and developing continuous awareness programs on the topic can bring light to the linen process. During rounds, April inspects rooms for improper usage of linen and creates educational materials related to her observations.

April highlights a few practices, “I run multiple campaigns throughout the year and incentivize the clinical team to get involved. Last January, I incorporated a crossword challenge that had fill-in-the-blank linen related questions. When a crossword was completed, the individual was entered to win a prize package.”

As a result of this initiative, April saw a decrease in linen waste within the first month.

Always stay in front of your key audience.

It is important to keep messaging around linen at the forefront of clinicians’ minds. April has introduced a number of creative and engaging methods for educating staff on a continual basis: “Awareness needs to be ongoing. During the holidays I create small packages with candies and treats that include linen puns and messaging to bring awareness to linen utilization.” She continues, “Posting materials at nursing stations, in front of soiled linen waste containers, in break areas, or by setting up educational tables throughout the year, you can bring greater visibility to the proper usage of linen.”

Bringing awareness to the linen process has provided a powerful impact at the hospitals April works with to manage their linen. Observing improper use of materials, determining where a facility can make changes, and implementing continuous education across all units can affect the way linen is viewed and change the habits of those who use it most. In turn, the time spent raising awareness on how to best utilize linen will result in reduced linen waste and increased cost savings.

To learn more about how HHS and the linen utilization management (LUM) team are bringing awareness to the topic, visit our LUM page.