The Many Benefits of Apricots

Mustard Greens: Boost Your Immune System and Add Spice To Your Diet

Why You Should Add Radishes To Your Diet

The Powerhouse of Nutrition: Okra

Okra is a powerhouse of nutrition that supports human health and bodily function on many different levels. Okra serves as an excellent source of fiber, amino acids, and a number of vitamins and minerals. All of these great nutrients provide a myriad of benefits, including helping to control your hunger, ameliorating diabetes, stabilizing cholesterol, increasing immunity, improving eyesight, and preventing excessive bleeding. 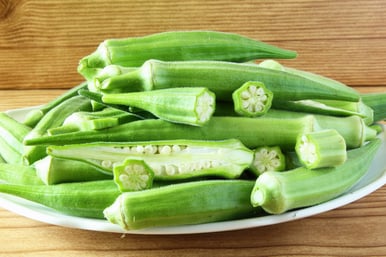 Okra is packed with fiber, also called roughage, the portion of the vegetable that cannot be fully broken down by your intestines. The soluble fiber found in okra helps to lower cholesterol. Soluble fiber interferes with absorption of bile in the intestines, and when the bile cannot be absorbed, it is excreted. In response to this process, the liver increases the production of LDL receptors to obtain cholesterol needed to produce more bile salts. This whole process creates a systemic effect that lowers cholesterol. Okra also includes insoluble fiber. This type of fiber cannot be dissolved by water and helps food move through the gastrointestinal system more easily. Both types of fiber give the feeling of satiety and hence help to curb appetite.

Okra is a good source of vitamins A and K, both of which have been shown to have numerous benefits. Vitamin A supports the production of white blood cells, which is what keeps your immune system strong and active. Vitamin K promotes blood clotting, which helps to prevent excessive bleeding; a benefit that is especially important for those who have bleeding disorders, such as hemophilia.

Interestingly, both the seeds and skin of okra have been shown to help lower blood sugar levels by increasing the sensitivity of insulin and slowing the carb-breakdown enzyme. When the body’s cells are more sensitive to insulin and there are fewer breakdowns of carbs to glucose, blood sugar is lowered, which makes okra a beneficial food source for anyone with diabetes.

Some people have an aversion to okra, as some forms of cooking cause it to have a slimy or gelatinous texture. Adding acidic ingredients, such as lemon, tomato, or vinegar to okra helps to reduce the slimy texture, as do some other cooking methods, such as baking, frying, or quick stir frying. There are many ways of cooking okra, so it just takes finding the method that you prefer.

Here are just a few of the cooking methods you can try to incorporate okra into your diet:

The Many Benefits of Apricots

Mustard Greens: Boost Your Immune System and Add Spice To Your Diet

Why You Should Add Radishes To Your Diet