South of the Border Stuffed Peppers

Bell Peppers are perfect for stuffing with meat, cheese, rice, and veggies. They taste great, but they also hold their shape well enough to contain all the other ingredients. This "south of the border" recipe, provided by HHS Chef Stephen Bloomer, is a delicious rendition to this classic recipe. Learn more about bell peppers in our featured ingredient by dietitian Melissa Biggs-Chavez.

SOUTH OF THE BORDER STUFFED PEPPERS 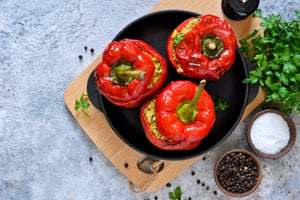 Cut off the tops of the peppers and set aside. Remove seeds and pith, being careful not to break through the skin of the peppers. Set aside.

Heat one tablespoon of olive oil in a large saucepan over high heat. Add onions and garlic and cook until lightly brown.

Add beef and cook for 6 to 8 minutes, breaking up the pieces as you stir, until no pink remains. Drain oil and return to the saucepan. Add taco seasoning and tomato paste and cook for 1 to 2 minutes.

Add rice, corn, pinto beans, and chicken broth to the saucepan. Bring to a simmer, cover, and reduce heat to medium-low. Cook until rice is just done, roughly 12 to 15 minutes. Add green onions and stir well.

Lightly coat the outside of the bell peppers with the remaining olive oil. Place peppers in a small baking dish so that they fit tightly together and stand upright.

Fill each pepper halfway with filling, add cheddar cheese on top, then use the remaining filling to fill each pepper. Cover each pepper with the previously removed tops. Cover tightly with foil and bake in the oven for 40 minutes.

Remove foil and top of the pepper, add more cheddar, and bake in the oven until the cheese is melted, about 7 minutes.

Serve with a dollop of sour cream.