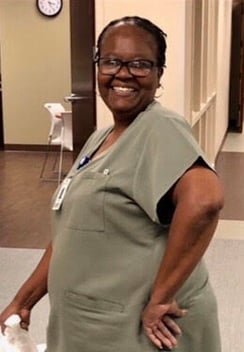 In Hazelhurst, Mississippi, Housekeeper Pearlina Jones was cleaning the main lobby at her facility when she noticed a patient who appeared to be struggling. The patient was sitting on a couch and trying to stand up, but he kept falling backwards and could not get his footing. Pearlina approached the man to see if he was alright. When it became clear that he needed assistance, Pearlina grabbed a wheelchair and quickly transported the man to the emergency room, where he was triaged and diagnosed with sepsis.

Thanks to Pearlina’s quick actions, the man was assessed and airlifted to a hospital in Jackson, Mississippi to get the care he needed.