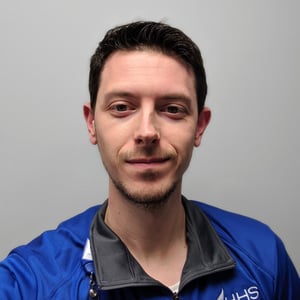 Since joining HHS in 2019, William O’Neal has been impressed with the company’s training regiment and values. William served in the United States Army, where his experience helped him instill perseverance and a “can-do” attitude.

These attributes have served him well in his career with HHS, and within a year, he was promoted from assistant director of EVS to director at HHS’ partner hospital in Sylva, North Carolina. During his time with the company, he has learned a wealth of knowledge from his former leader Harry Smith and his team members.

What does William enjoy most about HHS?

“Honestly, I like the openness that everyone seems to exude. All of the staff I have had the pleasure to speak with are always so honest and helpful. I’m very impressed that, unlike most companies, our culture and values seem to stick with everyone.”

William has been happily married for 11 years and has two children, five dogs, and 18 chickens. In his spare time, he likes building wooden toys and small furniture, a hobby that was heavily influenced by his dad who was a carpenter.