Team member Gregory Watson in Minneapolis recently gained some notoriety when a story of his excellent patient care was shared across the internet. While performing his regular cleaning duties at his hospital, Gregory struck up a friendship with a four-year-old that made a big impact on the patient and his family. The story appeared on local news stations, CNN, and more. We sat down with Gregory to learn more about how this experience has impacted him. 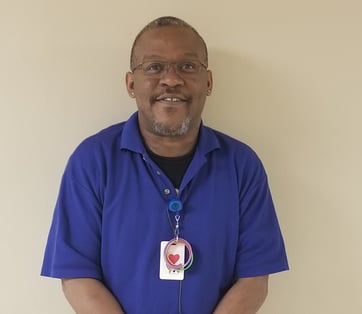 Tell us about your relationship with Cooper.

Well, we started as friends. One day I was doing a discharge and he came by in his wagon and was passing out candy. And he came up to me and asked if I’d like some and I was like, “Yeah I want some candy!” My sugar level was low and I needed it. After that we just started talking and we became friends. I started in this area about a year ago, and we became close about a month after that.

Cooper’s just a cool kid. He always has a smile on his face and is always happy. He calls me his best friend and I call him my best friend. I’ve made connections with other kids here, but not like this one. His parents really appreciated me. I try to be that way with all the kids, but it’s kind of hard because they’re sick. It was easier for Cooper for me to be his friend.

How do you think you can impact the patient experience?

If you’re going in and cleaning patients’ rooms, you shouldn’t go in and just not say anything. You have to say hi, engage with the patients. Converse. Not everyone wants to talk, but the majority will. I try to just talk to them, if they’re playing on an iPad or something I ask what they’re playing. That’s how it starts. AIDET [a communication technique utilized by HHS] is a good start, but it means more than that to me. Just talking to people can make a difference. I think it brings their spirits up to see, “Wow, this guy really cares, he’s not talking to me like a sick person.” They just want to be talked to like they’re a human being, and that’s what I do.

How does it feel to get so much attention for this?

It is what it is. It’s my job. I’m getting tired of it honestly. It’s overwhelming—I’ve never had this much attention. I keep getting stopped in the hospital all the time: “You’re that guy that was on TV!” I just like being me. I appreciate it, don’t get me wrong, but I won’t mind when it dies down soon. I’ve been at this job for nine years. It’s a great job. I love my managers and the support they give me, and I love getting to connect with the patients.

HHS Caters a Feast at the Boar’s Head Pageant