Malcolm Creer is a lead transporter at a facility in Englewood, Colorado and has been with HHS for three years. Early this year, he partnered with other members of his hospital community to create a nonprofit foundation called The Denver Homeless Head and Neck Cancer Screening and Care Group to provide head and neck cancer screenings for the local homeless population. Malcolm studied speech, language, and hearing sciences and sociology at the University of Colorado, Boulder, where he also played football. He is currently studying for the MCAT and plans to attend medical school in 2019.

Tell us about how you started this nonprofit. 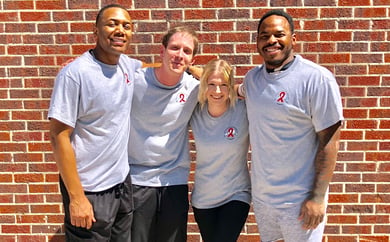 My director, Jamie Ptacek, introduced me to my mentor, Dr. Andy Nemechek, who came up with the idea to apply for the 2018 American Head and Neck Society (AHNS) community service grant, which is awarded by the Early Detection Committee at the organization.He challenged me, his nurse, and nurse educator to come up with an idea to submit to the committee. He said he was tired of hearing about people who won the grant and used the money to just hand out pamphlets and biscuits. He wanted us to do something more impactful. So, together we came up with an idea, found our target population, submitted our proposal, and won. The grant was $1000, and we went back and forth about what to do with the money. You can’t save the world with $1000, so we reached out to people in our community to see if we could get anything else donated to help out with our cause. A private donor was generous enough to match the prize money, awarding us another $1000. We’ve also been getting a lot of supplies donated, such as gloves, and we are continually reaching out to companies that might be willing to donate. A lot of it goes through word of mouth, by knocking on doors, and getting our name out there. Even if someone isn’t able to donate, at least we can let them know what we’re doing.

What does the organization do?

We decided to screen the homeless community for head and neck cancer. We chose Father Woody’s Haven of Hope as our location, and they allowed us to come in twice a month to provide these screenings. We started off by screening four people, but since then we’ve reached out to more people and it’s starting to go really well. We’ve now screened about 70 patients.

Who are the members of your nonprofit?

Our organization is made up of a collection of pre-med students, dentists, dental hygienists, and doctors. We all work closely together and all have a hands-on experience. We take turns acting as the greeter, transcriber, and screener. We all speak to the patients, hear about their background, how they got where they are, and how we can help them. We have meetings after each screening day to see where we can improve, and to discuss the pros and cons of our screening clinic days.

Our group has grown since we started and we needed more help, so I suggested to Dr. Nemechek that we get more HHS transporters to work with us. Bryant Rucker, Michael Miller, and Skyla Pappas, who are all pre-med students, are now working with our organization. It’s been great having them onboard.

How did you come up with the idea for this organization?

At first we were thinking about talking to college students, but Dr. Nemechek said that would feel too easy. He challenged us to step out of our comfort zones and serve those who are underserved and need it the most. He told us not to worry about the money, but instead to focus on what we can provide and how we can shift our focus to make sure we’re going in the right direction. So we put our heads together to see what we could come up with. If we didn’t win, we knew we could still try to do something just for the heck of it. We knew we could donate to the cause ourselves to help propel it. We accepted the challenge, and thanks to our hard work, we were chosen.

How has this experience impacted you?

We’re working with a population that society sees as people who gave up on life, but when you get down to it and learn more about them, you can see that they may have made some bad choices along the way, but they’re trying to make it better. They’re coming in for screenings, working at Father Woody’s, interviewing for jobs, and trying to get back on their feet. We chose to work with the homeless population because everyone always says no to them, and we’re trying to give them a voice and show them that anything is possible. We’re trying to get them the right help and quality care they need.

This has really helped me to get out of my comfort zone by talking to individuals who are on a different path than me; chatting with people who don’t have the same point of view. It can be difficult, but by just listening and understanding where they’re coming from really changes you as a person and humbles you.

What do you see for the future of this project?

Our goal is to keep expanding. We’d like to create a “clinic in a can,” so that we can put together a program that anyone can use. If we give this to someone in New York, we want to make sure that it flows the same way and that they can use the same platform and get the same data as us. We want to put a plan together so that anyone who follows our program will be able to use the same language, see the same things, and provide the same education. We are first focusing on expanding to other centers around Colorado, and then hopefully nationwide.

How can people follow you and support your work?

We are always looking for more support in the form of donations as well as new ideas. You can follow us on Facebook or Instagram or can reach out to us over email at ProvidingChances@gmail.com.