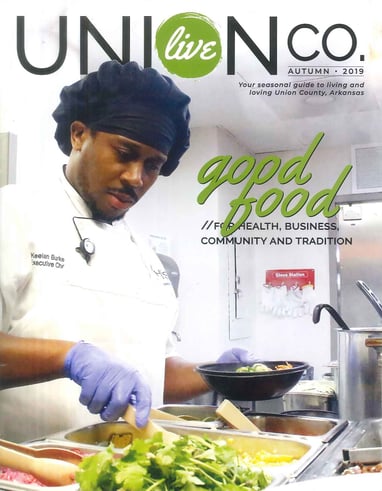 An HHS partner hospital in El Dorado, Arkansas renovated their cafe last year to create a warm and inviting space that would appeal to the local clientele. Since then, the cafe and the local HHS culinary team have been getting a lot of attention. The cafe, and specifically Executive Chef Keelan Burke and Culinary Director Judy Fussell, were featured in a cover story for the Autumn 2019 edition of Union County Live Magazine. The story covered the cafe’s new approach to providing healthy food in a warm and inviting atmosphere.

The article noted that Chef Keelan has been destroying the stereotype of poor quality hospital food “one happy customer at a time” through his innovative meals, including ramen Thursdays, sushi Fridays, and traditional turkey dinner Sundays. Originally from Louisiana, Chef Keelan aims to bring bold flavors and originality to the meals he serves, while still also providing the classics that the local community loves.