HHS Caters a Feast at the Boar’s Head Pageant 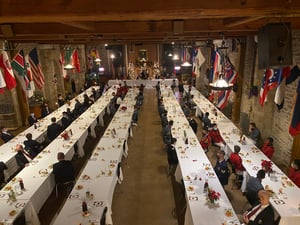 The Boar’s Head Pageant at St. John’s Northwestern Military Academy in Delafield, Wisconsin, dates back well over a century and celebrates the upcoming holiday break for their cadets.

Having its roots in a 16th-century English legend, the cadets dress up in medieval costumes and ceremoniously present a boar’s head to the academy’s president. The ceremony’s final event involves lighting a candle that remains lit until the cadets return from their break.

The banquet has been served family-style in the past, but with the current COVID-19 restrictions, the HHS Culinary team had to get creative. 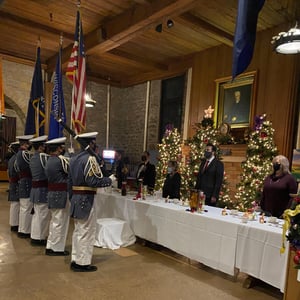 “We preset salads, desserts, and beverages before the cadets came in, and made sure to have separate carving stations for each kind of meat we offered,” shares HHS Chef Chris McKenzie.

Despite the limitations, Chef Chris and his team provided the cadets with a unique dining experience that included whole-roasted pigs and turkeys and vegetarian dishes so everyone could enjoy the winter feast.

The culinary team enjoyed participating in the ceremony and experiencing this deep-rooted tradition.