The EVS team members at a facility in Kingsville, Texas, have been widely acknowledged for the great support they provide. Each quarter the facility recognizes hospital employees as a part of the Sunshine Award, which honors support employees for showing compassion and making a difference in the lives of others. For the fourth quarter of 2019, a record six EVS team members received nominations for the award, along with a nomination for the entire department. 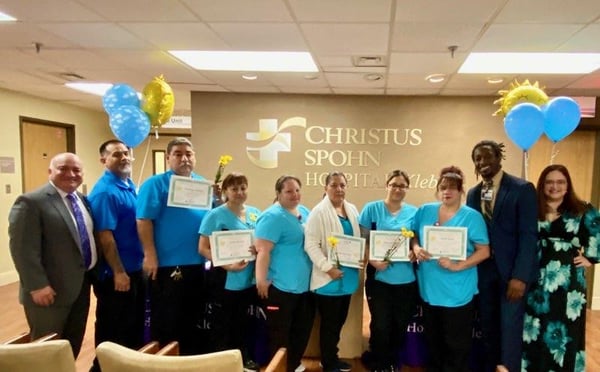 The entire EVS department was nominated after being recognized by the family member of a patient. The individual was impressed with the kindness and care displayed by the team and said, “The housekeepers kept the room as clean as could be and were always willing to do more if needed. They made me feel as if I were family. I was always greeted with a smile, and they made me feel like they really liked their job. The atmosphere was always sunny.”

An additional six team members were nominated by nurses and other hospital employees for providing great service with a positive attitude.  The nominations were spread across team members from all three shifts, including Lorie Delagarza, Kash Irons, Santiago Munoz, Lydia Mireles, Flora Martinez, and Monica Chavez.