Arizona Team Member Named as Employee of the Month 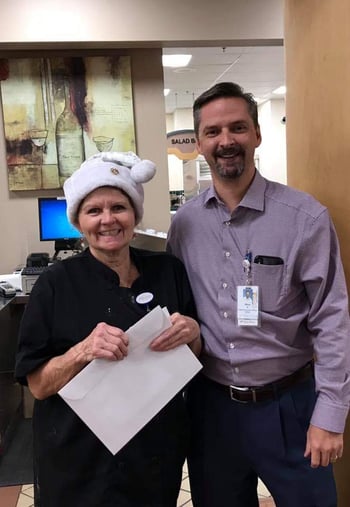 In Lake Havasu City, Arizona, culinary team member Cathy Clayton was named as employee of the month in December. Culinary Director Trula Hepner says of Cathy: “She is so incredibly deserving of this award. She is the laughter in our kitchen, sometimes on purpose, sometimes, not so much.  Because of her spirit, we dance, we sing, we cry, we consul. She makes you hungry for life, she touches your heart and nourishes your soul, she is the best.” Trula went on to list out the many admirable qualities that Cathy has and how she demonstrates them on a daily basis.

Integrity:  Cathy makes sure everything and I mean EVERYTHING that she makes is something that she would feed the people she loves most in the world.  She wants the food to taste good and to be pretty.

Compassion:  Cathy is willing to drop her extensive list of things to do on a dime to help anyone in need. She may tell you how you could have planned your time better as she stands and works beside you, but she will not leave your side until the job is complete—to her satisfaction, not yours.

Accountability:  She not only shows up to work, she comes early, she stays late and when she does have a day off, she works ahead so the people that are trying to replace her for the day aren't overwhelmed with the responsibilities she takes in stride on a day-to-day basis.

Respect:  She is one of the people on the planet that gives respect to everyone. Not because you have earned it in any way, but because you are a fellow human being, carrying around your own heavy load and simply trying your best to make it through the day. She "gets it."

Excellence:  Have you tasted the food in the cafe? Have you had a chance to see the buffet in the doctor's lounge every day? Have you had any of the house made soups? Have you enjoyed any catered food from our kitchen? That is all Cathy; excellence on many fronts.

"[Cathy] is the laughter in our kitchen... Because of her spirit, we dance, we sing, we cry, we consul. She makes you hungry for life, she touches your heart and nourishes your soul, she is the best.”